Who was Florence Nightingale?

The person behind the moniker attributed to the wave of new hospitals constructed to tackle the COVID-19 pandemic is a remarkable figure in British history. 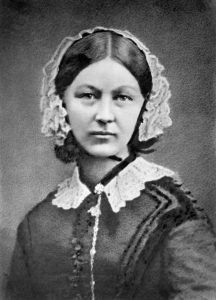 Born on 12 May 1820, Florence Nightingale, long depicted as a saintly nurse who saved thousands of lives, was a much more complex character than this. In fact, she was a mathematical genius who used her talent to strategise healthcare and medical waste. Here, we delve into the history of nurse Nightingale, exploring how she became the driving force behind an overhaul of the hospitals of her era, and still influences ours today.

Home taught by her father, Florence had a flair for mathematics and science and would avidly record detailed notes of statistics from populations, hospitals and charitable institutions.

Though it was customary for women of high social stature & which Florence was & to marry an eligible male, she declared her life would not take this path. She told her parents that God had called' her to enter nursing. Despite a negative reaction from her parents, and having to end a long relationship to pursue her calling, Florence visited hospitals across Europe before her father granted her the permission and resources to undertake nursing training in Germany.

In 1953, she became superintendent at a women's hospital in Harley Street. But it was the coming years, and the impending Crimean War, which would see Florence come into her own.

As the first war which allowed women to serve in the army, the Crimean conflict saw Florence appointed to lead 38 nurses at a military hospital in Scutari, Turkey. On arrival, the hospital was sodden and Florence immediately set her team of nurses the challenge of making the environment suitable for wounded soldiers. But although the hospital was cleaner and more efficient, army personnel were still dying in their thousands.

The British government was called out to Turkey to check the hospital's waste management sanitation and discovered it was built on a sewer; patients had been drinking contaminated water. After the water supply was flushed, the death rate plummeted.

Returning home from the war, Florence gained backing from Queen Victoria to set up a Royal Commission exploring the health of the British army. Using her statistical and scientific prowess, Florence quickly identified the majority of deaths of army personnel during the war were not caused by battle wounds, but by diseases which had been spread by poor sanitation and non-existent medical waste management.

She created a revolutionary rose diagram' to convey her findings to fellow scientists, politicians and the public, which demonstrated that following sanitation works in Turkey, deaths at the Scutari hospital fell by 99 per cent. It triggered the response needed for mass change across British healthcare; with new army medical, critical care, sanitary science and statistics departments established.

From there, Florence set about making healthcare accessible to all, regardless of wealth or income. Arguably the first precursor to the development of the National Health Service, she sent trained nurses into workhouses to help the needy.

Her work into the difference quality sanitation makes to healthcare spread across the globe. She continued to gather data on death rates around the world, analysing sanitation conditions. She drew correlations on the potential effects infected water could be having on populations, with a priority to ensure hospitals received full sanitation services.

There are memorials and museums dedicated to Florence Nightingale all around the world, such was the impact she had on the quality and delivery of healthcare and associated environments.

Most recently, we have seen emergency hospitals designed to deal with overflows of patients suffering from this novel, deadly virus, built in her name. Almost 110 years on from her death, she is still a leader in standards and her perseverance to protect and improve human life remains relevant. Recently we recognised this in the naming of 'Nightingale' hospital in London.